After thirty-five years with local disability services provider, Myhorizon, Paul Ballard is officially retiring, and is excited about taking time out to enjoy the things he loves. 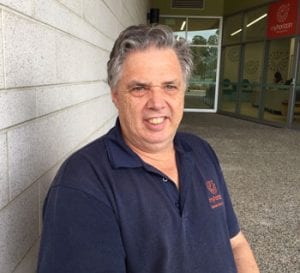 Paul joined Myhorizon as a service user back in 1984 when it went by the name of H.A.R.D and provided an activity therapy centre in Capalaba for local residents with disability.

“I remember back in the mid 1980’s when Myhorizon grew to include more service areas like Independent Living and Social Enterprises, which opened up supported employment opportunities for me.” Says Paul.

Paul talks fondly about his accomplishments within Myhorizon’s previous ‘Wire and Wood’ enterprise, where he contributed to product design, and was also the Social club’s Treasurer for a period of time.

Paul’s career at the organisation has more recently also included working for The Bush Pantry Café, The Event Centre at Myhorizon, as well as Myhorizon’s packaging and collating service.

“I’ve learnt lots of new skills over the years at Myhorizon, but I’ve also made many great friends who I’ll miss dearly. The people I’ve worked with are like a family, but I won’t be out of touch because I’ll still see them at Rec Club and Sunday bowling and some of my friends on the weekend. I’ve even agreed to help organise the Secret Santa like I have past couple of years.” Says Paul.

Paul says he has enjoyed his work life, but he is also very excited about now catching up on his TV and video games, and going for more walks and exercising at the gym.

Current Production Supervisor at Myhorizon, Troy Morton who has worked with Paul since early 2018 and supervised his daily work, describes Paul as a capable and helpful member of the team.

“Paul would often help others when he could, and he also had some great nicknames for members of the team such as ‘Happy Helen’, ‘Cheryl from the Navy’, and ‘Super Kev’. We will all miss his unique energy, but wish him all the best in his retirement.” Says Troy.